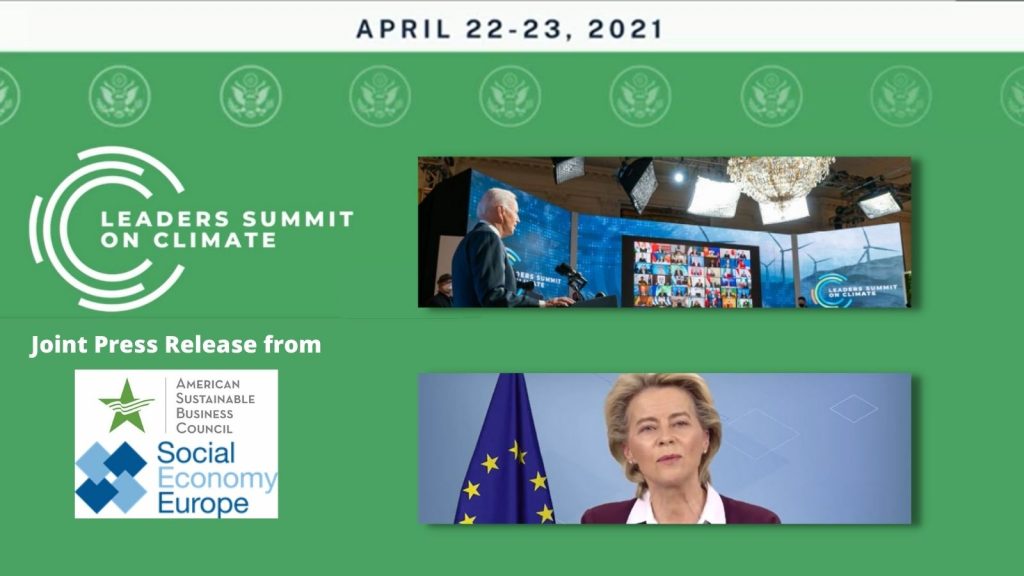 The American Sustainable Business Council (ASBC) and Social Economy Europe (SEE), representing over 3.1 Million social economy enterprises and organizations and Triple Bottom-line (People, Planet, Profit) Businesses and Business Organizations, welcome the vision and determination to achieve it  shown at the Leader’s Summit on Climate convened by the President of the United States.

Both the US and the EU have committed to become carbon neutral by 2050. The European Union has just reached an agreement to approve its first Climate Law aiming at setting into law the objective of a climate-neutral EU by 2050, and a collective, net greenhouse gas emissions reduction target of at least 55% by 2030 compared to 1990. President Biden’s climate change advisor, Gina McCarthy, noted, “It’s about what we do in the next decade”.

ASBC and SEE agree with President Biden’s message in his opening statement: “That’s what we can do if we take action to build an economy that’s not only more prosperous, but healthier, fairer, and cleaner for the entire planet,” he said, while also encouraging other countries to act.

“EU Commission President Von der Leyen said that this is our generation’s man on the moon moment. The Green Transition offers opportunities to create jobs, empower citizens; move from a centralised and polluting energy system to a decentralised and citizen-led renewable energy system. We see the opportunities to change our cities, renovate our buildings, rethink mobility; to give a second life to products and materials while creating work opportunities for individuals at risk of exclusion, to boost a more sustainable agriculture or a more ethical and transparent finance. All hands are needed to achieve these objectives, it’s a collective project. Social economy enterprises and sustainable businesses are pioneers in the Green Transition and united we stand to join our forces to fight climate change and build an economy that works for people and the planet. If we want a successful and popular green transition no one can be left behind”.-SEE President

Along with our partner Social Economy Europe, we believe that business and social economy leaders can and must play a role in helping shape and advocate for the policies to shape an equitable, just and sustainable economy. The business community we represent sees the incredible opportunity to reshape and rebuild our economies stronger and fairer as we reduce and eliminate the threat of the climate crisis. To address the full climate challenge, we need to find real solutions and take determined action throughout all facets of our economy from reimagining green infrastructure, regenerative agriculture, safer chemicals, plastic, energy efficiency, renewable energy, and green buildings, to a more just transition from fossil fuels so that no energy community is left behind in the global march towards an inclusively cleaner, healthier and more equitable planet

The American Sustainable Business Council (ASBC www.asbcouncil.org) partners with business organizations and companies to advocate for solutions and policies that support an equitable, sustainable, stakeholder economy. ASBC is a multi-issue, business organization advocating on behalf of all sectors, sizes, and geographies of industry. ASBC and its association members collectively represent over 250,000 businesses across our networks. ASBC is coalition-focused in our approach to solving the pervasive and systemic issues of climate and energy, infrastructure, circular economy, and creating an inclusive stakeholder economy, all seen through the lens of racial equity and justice. ASBC is changing the rules by which business is done so it is better for all people and the environment. In 2020 ASBC and Social Venture Circle created a strategic alliance to bring together a powerful combination of values-aligned entrepreneurs, business leaders, and investors of responsible companies’ innovative ideas and the ability to be key policy influencers in their own communities as well as at the federal, state and local levels.