The social economy is a major socio-economic player of our European social market economy. There are 2.8 million social economy enterprises and organisations, ranging from SMEs to large EU groups, that operate in all sectors, employing 13.6 million citizens ad accounting for 8% of the Union’s GDP.

The European social economy is made of a diversity of enterprises and organisations strongly rooted in our Single Market, as cooperatives, mutuals, associations, foundations and social enterprises, among other, united by values and features as the primacy of people and the social objective over capital, democratic governance, solidarity and the reinvestment of most profits to pursue sustainable development objectives.

The social economy is formed by enterprises and organisations of all sizes, ranging from SMEs to large companies and groups, that operate in all the economic sectors such as: industry, education, healthcare and social services of general interest, agri-food, ethical and cooperative finance, insurance, renewable energy, re-use and recycling, retail and consumption; housing, tourism, culture and leisure, building, professional services, digital economy, and so on.

The primacy of the individual and the social objective over capital

The social economy is formed by enterprises and organisations of all sizes, ranging from SMEs to large companies and groups, that operate in all the economic sectors such as: industry, education, healthcare and social services of general interest, agri-food, ethical and cooperative finance, insurance, renewable energy, re-use and recycling, retail and consumption; housing, tourism, culture and leisure, building, professional services, digital economy, and so on. 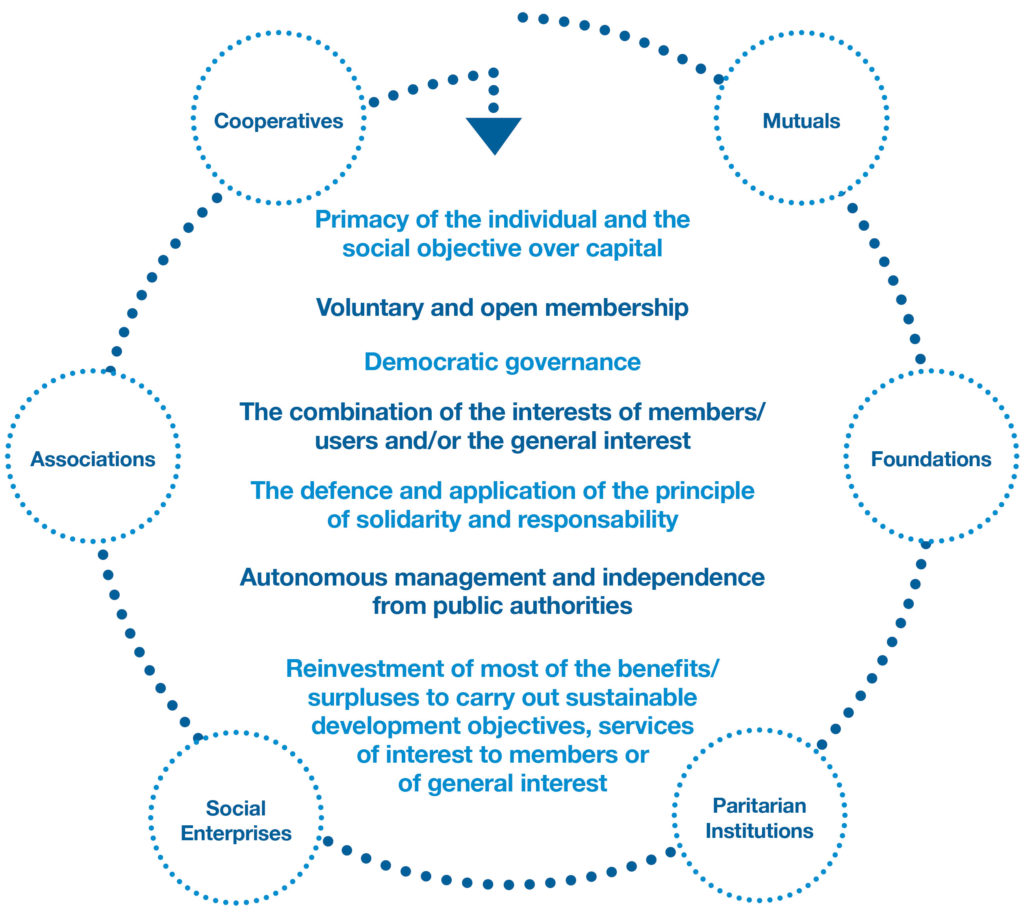 The European Union and the rest of the world are experiencing disruptive technological, social and economic changes. The emergence and progress of digitalisation, blockchain and big data, or the global rise of inequalities and job insecurity, are trends quickly changing our world, bringing new opportunities but also new challenges, and urging us to debate about the future that we want to build collectively. Europe needs the social economy to reach out to its citizens, detect their real needs and make them part of creating solutions to a number of challenges, such as unemployment or precarious work, social exclusion, discrimination and racism, climate change or the lack of social cohesion. Likewise, the social economy needs the European Union to improve its visibility, as an alliance of virtuous enterprise models, and to support its recognition and development -on equal footing with other forms of enterprise- throughout the European Single Market.

The social economy is a driver of economic and social progress for all that has proven its capacity to provide innovative solution to today’s economic, societal and environmental challenges by:

Creating quality jobs for all, through collective entrepreneurship and through work and social integration of disadvantaged people (see our work on integrating people with disabilities)

Contributing to territorial cohesion because of its local dimension social enterprises and organisations’ its strong relationship to entities like neighbourhoods, communities, localities or regions. local economic development

Leading in the fight against climate change as a promoter of the circular economy and the ecological transition, including the transition towards renewable energies as well as leading in advancing sustainable agriculture and rural development

Reinforcing democratic values because of their method of governance which favours participation and openness through independent management, democratic decision making process and primacy of people and labour over capital in the distribution of income

Guaranteeing equal opportunities and equality, especially gender equality, as women represent over 60% of the workforce of many enterprises and organisations and fully understand how gender equality is a key for economic and social development in Europe and beyond 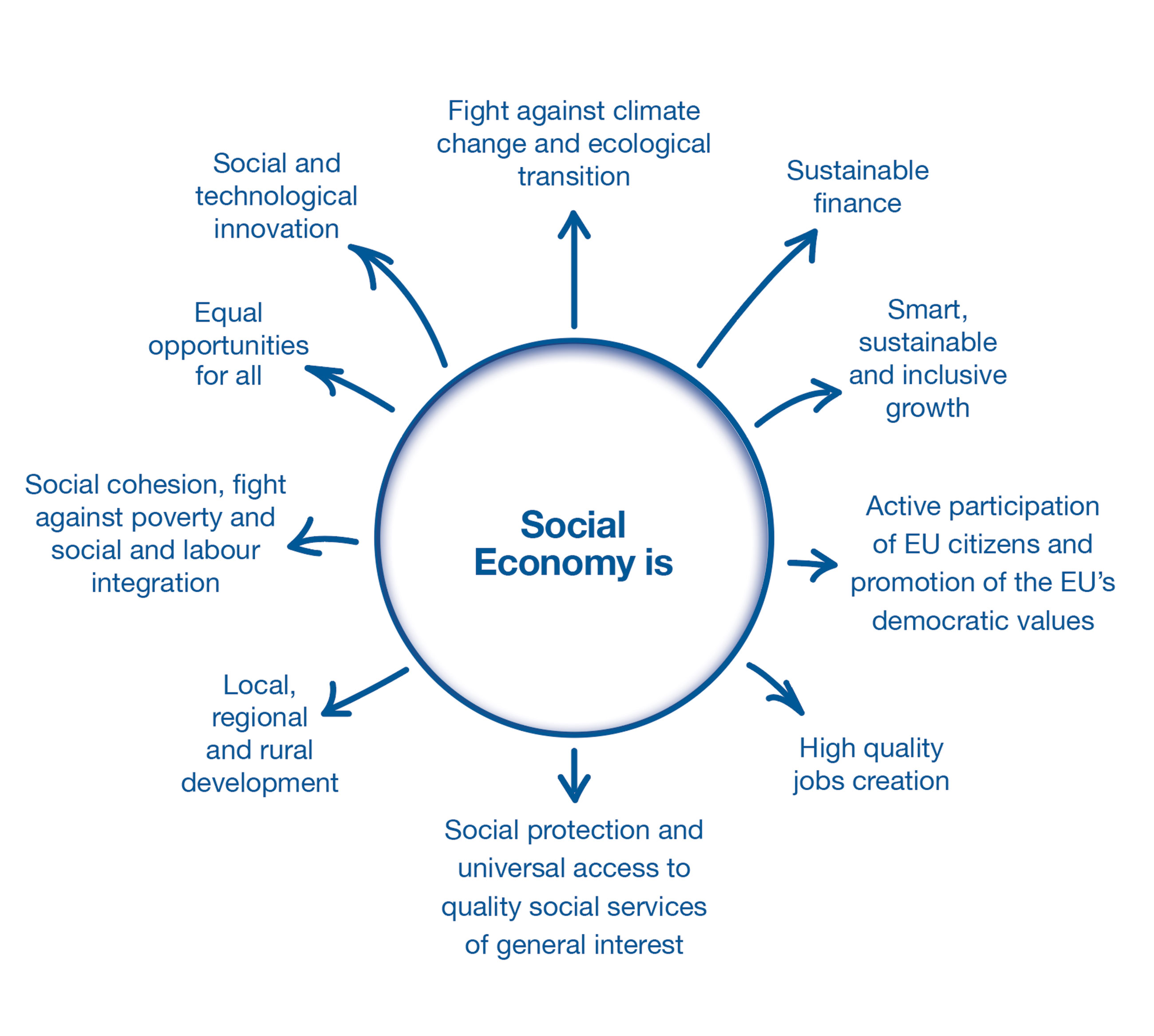 THE SOCIAL ECONOMY IN THE EU – a European success story

In the last years, the social economy has increasingly gained political visibility as a model that constitutes an important pillar notably in terms of employment and social cohesion across Europe and which is also key to achieving the goals of the Europe 2020 Strategy. Because of the strong connection the Social Economy has with civil society and because of its social commitment, social economy enterprises and organisations are at the forefront when it comes to offering innovative solutions to the main economic, social and environmental challenges of our time, and contribute to the achievement of key EU objectives.

The Social Economy is also a key actor for the European Pillar of Social Rights to be a useful instrument to ensure the economic and social convergence, and to improve the welfare of the more than 512 million EU citizens. Social Economy actors are determined to contribute to shaping a future based on sustainable development and economic and social progress, through a European Union based on cooperation, democracy, solidarity, respect for its diversity, innovation and active citizenship.

THE SOCIAL ECONOMY – A GLOBAL MOVEMENT

According to the United Nations Secretary General report on Cooperatives in Social Development (2017), the social economy contributes about 7% to the world’s gross domestic product (GDP) and to global employment.

As the European Commission’s reflection paper For a sustainable Europe by 2030 points out, the Social Economy is an opportunity and a driver for the implementation of the 2030 Agenda and its 17 sustainable development goals in Europea and at global levem, especially for the achievement of objective 8 “promote sustained, inclusive and sustainable economic growth, full and productive employment and decent work for”.

The ICA unites, represents and serves cooperatives worldwide. Founded in 1895, it is one of the oldest non-governmental organisations and one of the largest ones measured by the number of people represented: 1,2 billion cooperative members on the planet.

It is the apex body representing cooperatives, which are estimated to be around 3 million worldwide, providing a global voice and forum for knowledge, expertise and co-ordinated action for and about cooperatives. Read more about our mission here.

The International Cooperative Alliance works with global and regional governments and organisations to create the legislative environments that allow cooperatives to form and grow.

The ICA is the guardian of the Statement on the Cooperative Identity, which includes a definition, 10 values and 7 operational principles: it is the minimum common denominator for all cooperatives in all sectors and all regions. Discover the history of the cooperative movement here.

Operating from a global office in Brussels (Belgium), the ICA is organised with four Regional Offices: Europe (in Brussels), Africa (in Nairobi), Americas (in San José) & Asia-Pacific (in New Delhi). Each regional office pursues the same goals: representing the International Cooperative Alliance in their part of the world and providing resources to its members. Their work benefits from the International Cooperative Development Program #coops4dev, a five years’ partnership between the ICA and the European Commission.

The ICA is also organised with eight Sectoral organisations in agriculture, banking, retail, fisheries, health, housing, insurance, and industry & services. Each sectoral body provides resources to their members, as well as conducts surveys and researches to document and improve the cooperative model.
Find out more about the ICA here.

The International Association of Mutual Benefit Societies (AIM) is an international umbrella organisation of federations of health mutuals and health insurance bodies counting with 59 members from 30 countries around Europe, Latin America and Africa and the Middle East. AIM members are all not-for- profit organisations providing health coverage to around 240 million people, as well as services relating to compulsory and/or supplementary health insurance, some of them also managing health and social insurance services. Our members are either mutuals or health insurance funds. They rely on no shareholders: all surpluses are used to benefit their members and they comply with the principle of solidarity between members. They are:


● Independent, private legal entities
● Democratic organisations: each member has one voting right
● Public or private organisations
● Governed by representatives of users and social partners
AIM is a member of Social Economy Europe, find out more about AIM here

SSE International Forum promotes Social and Solidarity Economy within a pluralistic economy and on all continents. For over 10 years, this international network has proved to be a real think tank in three fields of action:

● Gather SSE leaders and major players, because sharing and the willingness to build together are at the core of this model;
● Co-create sustainable and inclusive projects, because field initiatives provide clear evidence of SSE’s social, civic, environmental and economic efficiency;
● Public or private organisations
● Influence policies and agendas for SSE, because stronger international acknowledgement will further develop this efficient and resilient model on all continents.


Initiator and permanent vice-secretary of the International leading group on Social and Solidarity Economy (ILGSSE), SSE International Forum is accredited by the UN Economic and Social Council (ECOSOC) and an observing member within the UN inter-agencies Task Force on SSE (UNTFSSE). Find out more about SEE International Forum here.

● Intercontinental network for the promotion of social solidarity economy (RIPESS):

The inherent nature of RIPESS includes the objective of contributing to systemic, transformative change. It does this by demonstrating how much SSE contributes in terms of real answers at local level to the existing system that is clearly showing its limits. RIPESS members believe in the importance of the globalisation of solidarity, and the ability to build and strengthen an economy that places people and planet at the centre of its activities. Find out more about RIPESS here.

GSEF is an international association of local governments and civil society networks engaged in the promotion of the social economy as a mean to achieve an inclusive and sustainable local development. GSEF promotes various forms of social economy, including social enterprises, cooperatives, foundations, mutuals and self-help groups that put people over profit.

GSEF believes that systemic changes start first at the local level based on the partnership between civil society, and the public and private sectors. Thus, the GSEF is co-chaired by both local government (represented by the mayor of the chair city) and a representative of civil society networks. As of December 2018, GSEF brings together 49 cities and social economy networks coming from 29 countries around the world.
Find out more about GSEF here. 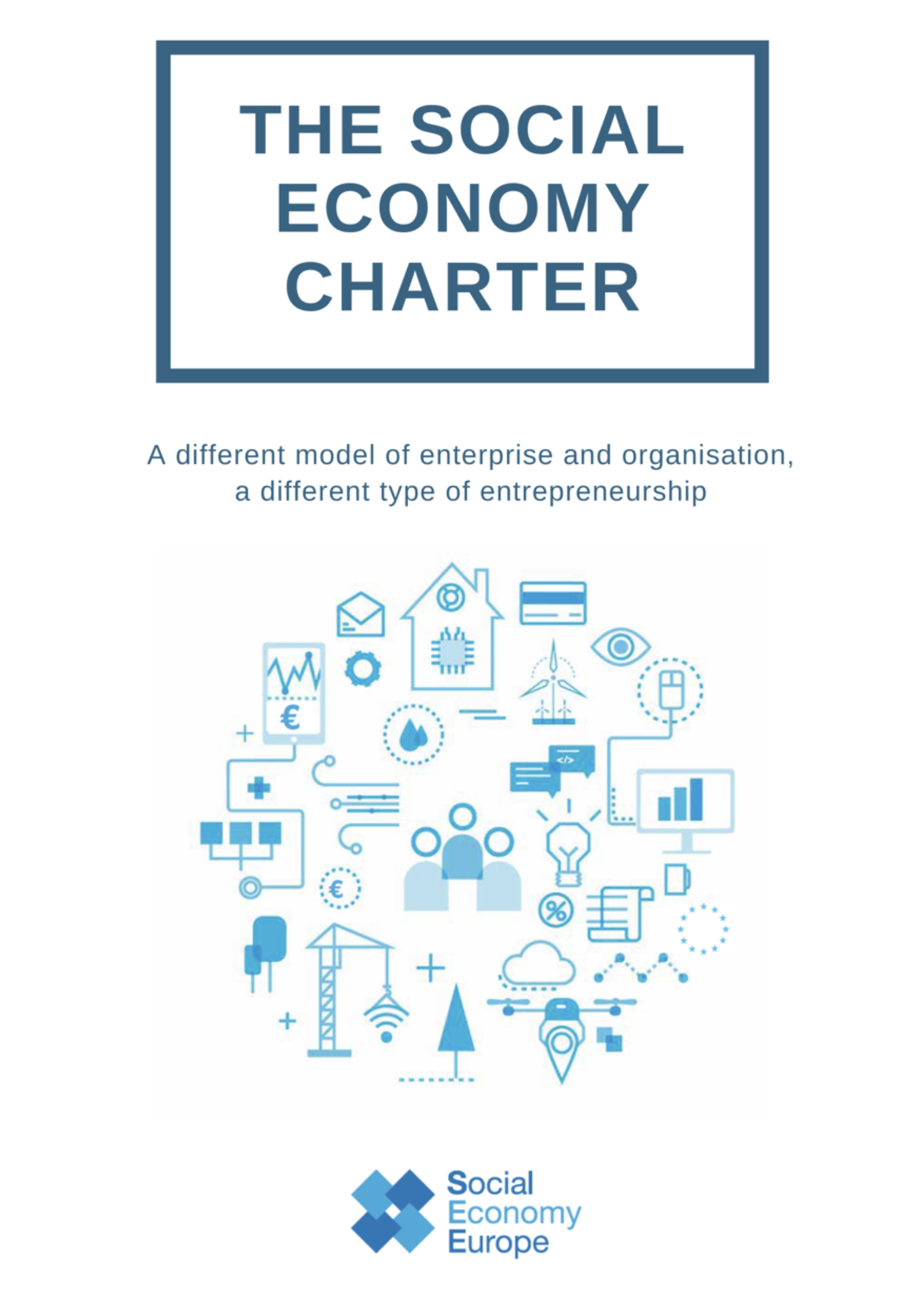