On February the 17th, the city of Paris welcomed the event The social economy, the Future of Europe, organised by the French Presidency of the Council of the European Union at the Ministry of Economy and Finance of France in Bercy.This happens to be the first of a series of actions on the social economy of the French Presidency that will converge in a massive in person event in Strasbourg on 5 and 6 May 2022. You can watch the full video of the event here.

The event, as Social Economy Europe director, Víctor Meseguer, who presented and moderated the event, said at the beginning from his moderating role, mainly consisted on an exchange between the Secretary of State for the Social, Solidarity and Responsible Economy of France Olivia Grégoire and with the European Commissioner for Employment and social rights Nicolas Schmit, on the implementation of the European Action Plan for the Social Economy (SEAP).

For that matter, eleven social economy leaders, six women and five men, coming from nine EU Member States, were invited to ask their questions and share their expectations on SEAP. 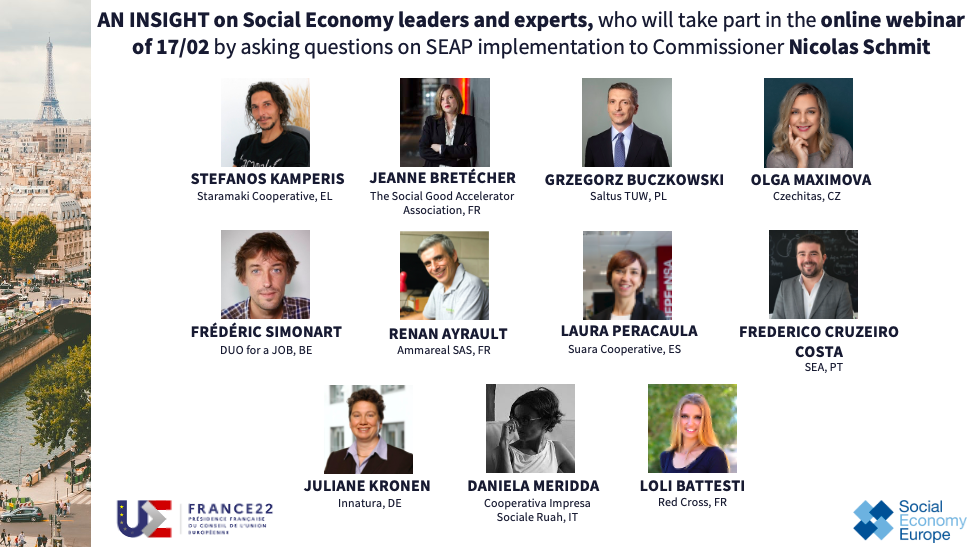 French State Secretary Olivia Grégoire opened the event by thanking Commissioner Schmit for his commitment on the social economy’s scale up, and for his role on the elaboration of the SEAP. She stood for the willingness of the French presidency to help 2022 to become a game-changer year for the social economy through the SEAP implementation, and added that we are all working together towards an economy in which we all deeply believe”. She also thanked Social Economy Europe, as the EU Network representing the general interest of all social entities, and its director Víctor Meseguer, for the good cooperation with the French Presidency of the Council.

During his first intervention, Commissioner Schmit took the floor to highlight the three priorities of the Social Economy Action Plan, which are to create a framework conditions to develop the social economy -creating an ecosystem for its growth all around Europe-, to facilitate tools to strengthen capacities and skills, and to improve the visibility and the recognition or the social economy.

Before the question time began, Commissioner Schmit assured that the Social Economy Action Plan will have a positive and necessary impact on social rights, employment, fight against the climate change, green transition and boosting the circular economy, digitalisation, inclusion, equality, and many other areas.

Many interesting questions were asked on funding and financial instruments -as Invest EU programme-, opportunities for the youth, overcoming obstacles for the social economy expansion in the Single market, start-up policies differences, Pact of Skills, replication and scale up of successful projects , upskilling and reskilling, digitalisation, socially responsible public procurement, new technologies investment, efficiency of resources, transition pathways, etc. You can find the eleven questions to Commissioner Schmit here. 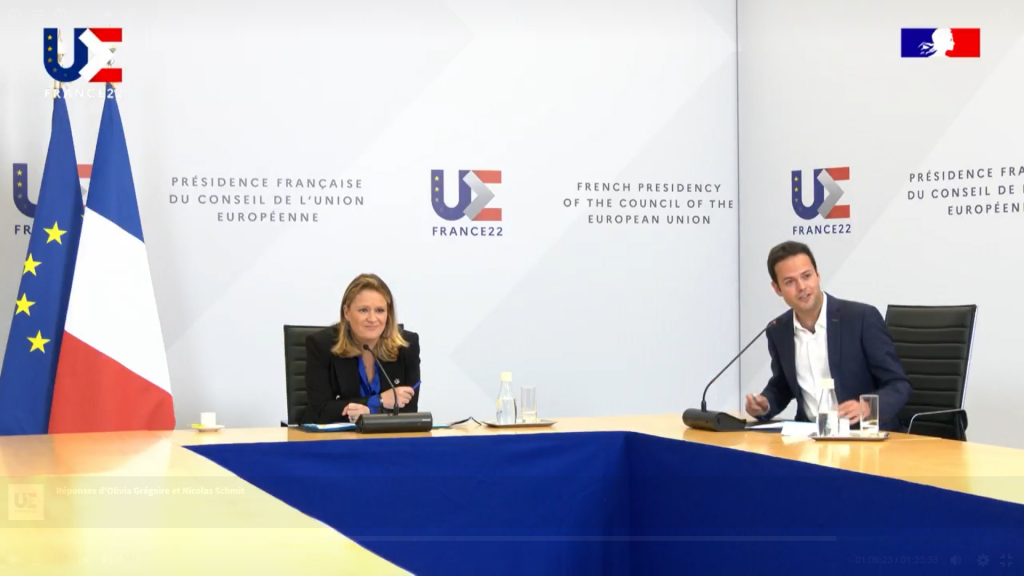 Commissioner Nicolas Schmit shed light about all the issues raised, emphasizing that the collaboration of the social economy stakeholders, Member States and all EU Institutions is essential for a successful implementation of the SEAP. He also highlighted that monitoring actions and results will be key to this matter.

Commissioner Schmit reminded that the plan has to be implemented at a multilevel scale so we all are important to move forward, and assured that the SEAP is ready to accompany young entrepreneurs create their own social companies in order to have a job that makes an impact: “Promoting young social entrepreneurship will allow the youth to express their vision of the future, to create a job that makes sense and to contribute to local economies enriching their territories”.

He also referenced to the access to innovative funding for social economy enterprises such as Invest EU programme or the EU guarantee scheme: “The Commission has been supporting through different funding programs and it will continue to do so, not only on a financial level, also with advice a guidance to help social economy companies thrive”.

Alongside other relevant information, Nicolas Schmit talked about the creation of the European Competence Center for Social Innovation, an instrument that will support social innovation helping social economy enterprises to use digital tools and innovate in their fields.

State Secretary Olivia Grégoire also share some insight in key areas as Socially Responsible Public Procurement, access to finance and social impact bonds and on the follow up of SEAP’s implementation.

Certainly, there were more details about the actions to be taken in the next months and, furthermore, the impact the Social Economy Action Plan will have in our society an economy, placing the social economy at the center of the table for the first time in history.

The closure of the event was on MEP and Co-Chair of the Intergroup on the Social Economy, Patrizia Toia. The MEP stated that the Social Economy Intergroup will push for the SEAP implementation, working together through clear objectives, initiatives and technical assistance. “We are engaged in making this Action Plan concrete”, she said.

Patrizia Toia ultimately addressed to the viewers and participants by inviting them to the SEIG public hearing “Towards a Council Recommendation on social economy: boosting the convergence of social economy enabling frameworks” that will take place on the 4 of March. Registrations are open here.

Throughout the event, it has been possible to feel the energy of the social economy community, that is willing to join forces in order to make the implementation of this Action Plan a reality. At the same time, the commitment of the three EU institutions is a clear sign that we are going in the right direction towards the co-creation of an economy that works for the people and the planet.

The event was followed by an Informal Ministerial Meeting on Social Economy led by State Secretary Olivia Grégoire, at the end of which 23 Member State co-signed a joint declaration/ press release.

An article by Laura Almirante, Communications Coordinator at SEE.