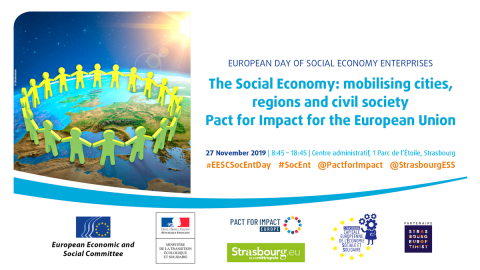 In Strasbourg Social Economy Europe celebrated the European Day of Social Economy Enterprises co-organised by the European Economic Social Committee, the City of Strasbourg and the Eurometropole, and the French Ministry for the Ecological and Solidary Transition (High Commissioner for Social and Solidarity Economy and Innovation, Mr. Chidtophe Itier).

The newly appointed Commissioner for Jobs and Social Rights, Nicolas Schmit, participated in the EU Day as a long standing supporter of the social economy.

Nicolas Schmit made it clear that because of its capacity to contribute to the ecological transition, to create quality jobs, and reduce inequalities the social economy has to play a key role in EU initiatives such as the Green Deal, the European Pillar of Social Rights.

Nicolas Schmit stressed that ¨the social economy has got to play a central role in the fight against climate change, that, because of its social and solidarity dimension it is the best placed to leave no one behind.¨

The Committee of the Regions President, Karl-Heinz Lambertz, said that social economy is the fabric of cities and regions, an economy engaged with local development that never delocalises and is at the service of communities, always offering solutions to the challenges and needs of today. For this Mr Lambertz said: “The Committee of the Regions supports the European Action Plan for the Social Economy put forward by Social Economy Europe.”

Spain to chair the Monitoring Committee:

In parallel to the EU Day of Social Economy Enterprises, the Monitoring Committee of the Luxembourg Declaration had a meeting chaired by Christophe Itier, High Commissioner for the Social and Solidarity Economy and Social Innovation, with the participation of Yolanda Valdeolivas, Spanish State Secretary for Employment, Gabriel Bastos Portuguese State Secretary for Social Security, and high-level representatives of the Italian and Luxembourgish Governments.

In this meeting Christophe Itier passed the torch to the Spanish government which will lead the group in 2020 – a strategic year for the social economy. Spain was the first EU Member State which adopted a Social Economy law in 2011, followed by Portugal, France and Romania among other. Furthermore, the government adopted a Social Economy Strategy 2017-2020 and is committed to revitalise the consultative body for the promotion of the Social Economy formed by stakeholders such as CEPES, regions, and academics.

For 2020 Spain aims to widen the number the Member States participating the monitoring committee boosting bilateral cooperation (the Spanish government already has a MoU with the governments of France and Portugal), and promote an ambitious EU agenda for the Social Economy. To start with, the Spanish government is organising a side event on the Social Economy in the framework of the UN Climate Change Conference of December 2019 in Madrid (COP 25). The selected European Social Economy Capital for 2020 will be announced in the coming weeks.

Fourth edition of the EU Day organised by the EESC. Strasbourg, France.